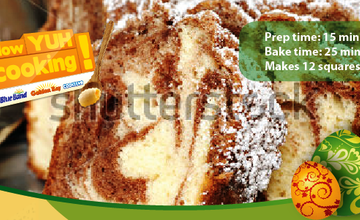 Prep time: 15 minutes
Bake time: 25 minutes
Makes 12 squares
1. Preheat oven to 350 degrees. Line a 9-by 13-inch cake pan with foil, leaving some foil hanging over all four sides. Grease the foil with margarine.
2. To make the first layer, whisk together flour, baking powder, and salt in a small bowl, set aside.
3. Cream margarine and sugar until light and fluffy. Add egg and milk then stir in dry ingredients.
4. Spoon mixture into your pan and spread into an even layer.
5. To make the second layer, whisk together golden syrup, milk and vanilla.
6. Cream margarine with sugar and salt until light and fluffy then beat in the egg. Alternate mixing in your flour and syrup mixture bit by bit until all combined.
7. Drop spoonfuls of your batter over the first layer and spread evenly to form the second layer.
8. Mix together the sugar and cinnamon then sprinkle it evenly over the cake.
9. Bake the cake for 25 minutes until cake is gently set in the centre, it may still be slightly "wet" in the centre. Remove from oven and let cool on a wire rack. The centre of the cake will settle as it cools- this is normal.
10. Once cooled, lift out the cake using the foil and cut into squares.